At the heart of the Domaine de Capoue, lies an Energising Trail that naturally recharges your body’s energy levels as you pass through alternating positive and negative points in the geo-magnetic field.

The geo-magnetic energies of the region have been mapped, enabling an Energising (or Regenerative) Trail to be created in the heart of the Domaine de Capoue. Taking approximately 30 minutes to complete, you pass through 12 positive and 12 negative points which are located at the crossing points of the geo-magnetic lines, and where certain vibratory phenomena have appeared (such as Telluric/Cosmic chimneys, and Vortices).

The idea of regenerative energy fields is an ancient one. They are found in certain cathedrals or round small Gallo-Roman temples. They are based on networks of geo-magnetic lines that create a grid of three-dimensional energy waves.

From the ancient Egyptians to the Greeks and Romans, via the Celts, Mayans, Chinese, Indians and other great civilizations, Man has used his knowledge of the invisible energy forces of the Earth and the Cosmos to locate the most auspicious sites upon which to build bridges, cities, cathedrals and temples.

With a passion for ancient temples developed over 25 years, Yann’s research has led him into the fields of Geo-biology, Religious Architecture, Bio-energy, Shamanism and Nature Spirits.

He also works with Zomes, forms inspired by ancient temples, as well as sacred geometric principles and bio-dynamics, which can transform the vibrational qualities of the environment. 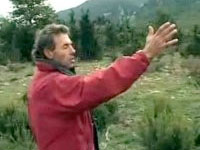 Yann has identified the geo-biological phenomena of the region, and used this knowledge to create the Energising Trail without the help of conventional methods of measurement. However, various devices, along with external experts have been used to assess the impact of the Trail.